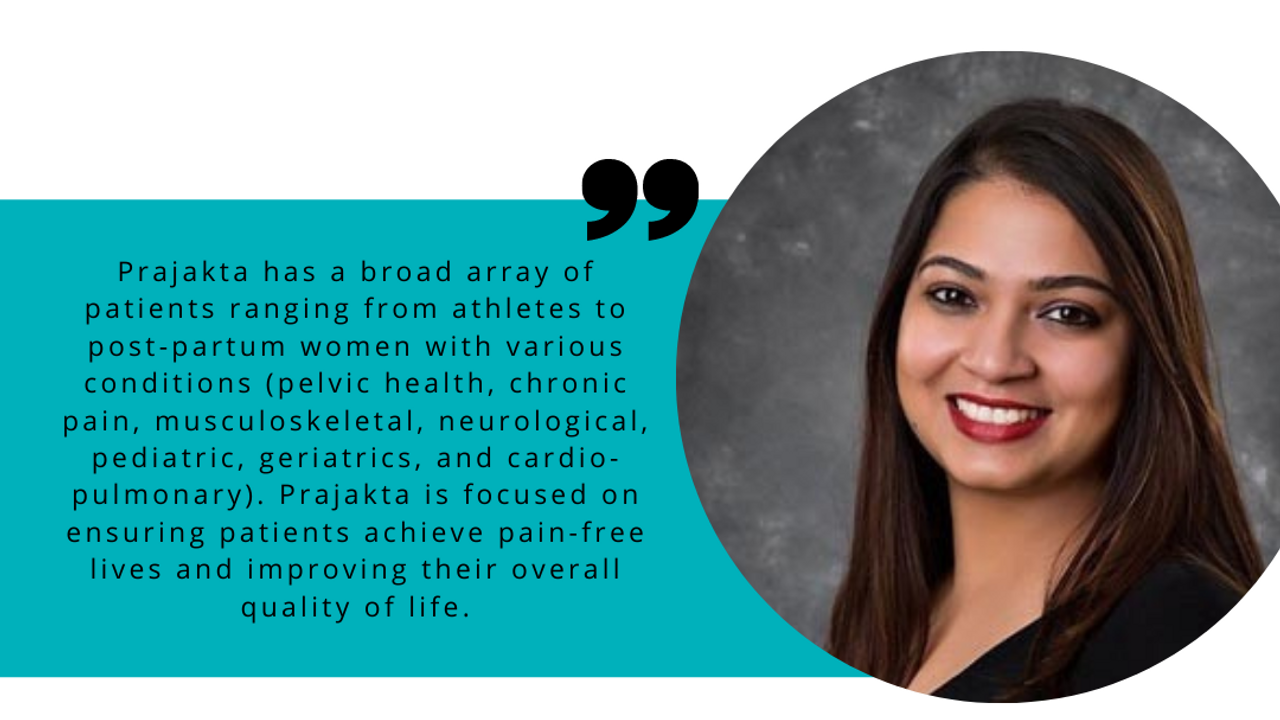 For many years now, Canada has been an attractive option for international students and professionals. Physiotherapy is no exception. Prajakta Shirolkar came to Canada 10 years ago to pursue her work in physiotherapy. Expecting to explore her options in North America before intending to return to India, she tried on many roles before ultimately deciding to stay for the foreseeable future. Now, she aspires to empower other international practitioners interested in making the leap into the Canadian physiotherapy community. Her perspective is an example of the many routes open to international physios like her.

The first challenge international physiotherapists often face upon arrival in Canada is receiving their license to practice. For Prajakta, her avenue was navigating her qualifications received in India compared to the Canadian education system. Here, “there’s a 4-year Bachelor’s degree and then there’s a 2-year Master’s degree, whereas in India, it’s an aggregated 5-year Bachelor’s degree. And then if you wanted to do a Master’s degree, it’s a specialization into ortho, cardio, etc.” With her Bachelor’s degree from her time studying in India behind her, she still had to take examinations when coming to Canada. She knows international students’ unique challenges very well. Having gone through a short, but rigorous series of evaluations herself, she empathizes. The intensity of getting her education evaluated alongside a written and practical exam in quick succession was difficult, but worth all the hard work in the end. “Don’t give up, go through the journey, because when you get on the other side, the struggles won’t even matter because you’ll get so much out of it.”

While waiting to receive her physiotherapist’s license, Prajakta took on roles outside of the profession to bulk up her experiences. “When I first came … I wasn’t able to work in the profession. I tried to work a little bit as a physiotherapy assistant, but I got better opportunities outside the profession”. These options ranged widely between working with nonprofit organizations, public education, private clinics, and Alberta Health Services. In trying on different roles in different spaces, she could begin narrowing down where she could best put her expertise to use.

Location plays a crucial role in any physiotherapist’s work. Prajakta found the difference between working in small towns and large cities in particular ultimately determined where she chose to do her work. “The bigger cities are busier. You get a lot of different populations and lots of variety of injuries. It’s a very fast-paced life.” This larger, more central population with a far more dynamic lifestyle is a popular choice for physiotherapists, who open many private clinics in the area, unintentionally leaving small towns “ignored” as a result. Working in small towns like Lloydminster brought her perspective. “The feedback that we received from a lot of our patients is things like, ‘I have to drive to [the city] to see pelvic floor therapists, or to see an orthopedic therapist.” She took those comments and set out to find ways to make physiotherapy more accessible to her small town patients. “We didn’t want to duplicate services. Bigger cities are saturated with a lot of private clinics. … that was one thing that we wanted, to bridge the gap in services [for small towns]”.

Having settled on where she would offer her expertise, she embarked on her latest venture within her physiotherapy career: opening her own clinic. Running her own business is still a new endeavour. She’s only been a business owner for a year and is “still learning”. This new challenge pushes her out of her comfort zone. “I know how to be a physio. And I know I’m great at it. It’s how to be a business owner [now]”. Balancing these two worlds means learning to apply the confidence she has in her work as a physiotherapist to her newfound role as an entrepreneur. “I’m trying to take up more courses on business management and trying to network with other business owners”. The process is still very fresh for her, but the entrepreneurial aspect of opening her own clinic comes with its joys she wouldn’t trade. Above all, it’s given her freedom of choice to do exactly what she wants with her work. “I love that when I come up with an idea, I can implement it and see whether it’s succeeding”. Having that ability to make her ideas a reality without anything standing in her way allows her to explore and adapt. “Having the flexibility to make those decisions and to change those policies and to be able to implement anything, especially when it comes to any cutting edge equipment … you see it, and you want it, and [now] we’re doing it”.

After a decade of building up her skills and experiences across Canada in many different contexts, Prajakta has carved out a space for herself within her profession that brings her joy. She’s learned many things along the way, and continues to learn in her newest projects. The biggest piece of wisdom she can pass on to other international physiotherapists and students making the leap to Canada is that “it's difficult, but it's worth it. Hang in there, don't give up, give your hundred percent. Just be yourself, study hard, and go out there and kill it.”

Prajakta Shirolkar started her journey as a physiotherapist in India. She moved to Canada and continued her passion and has worked in many private and public clinics and hospitals. Prajakta has a broad array of patients ranging from athletes to post-partum women with various conditions (pelvic health, chronic pain, musculoskeletal, neurological, pediatric, geriatrics, and cardio-pulmonary). Prajakta is focused on ensuring patients achieve pain-free lives and improving their overall quality of life.

All Categories board members member spotlight